Hands on Review of the Canon EOS M3 VS 5D MKIII

As of Fall 2015 you can buy this camera easily on Amazon (rather than the hoops I jumped through to import if from Japan!

**1/11/16** Almost 10 months into ownership so I thought I’d add a long term update. We actually use the camera more than I thought I would. My wife will almost exclusively use this over her camera phone for anything she wants to look decent. The built in wifi makes it easy to send photos to your phone or even directly to facebook. I was originally a bit worried about the sturdiness of the flip out screen and pop up flash. However this camera has been dropped from 3ft + at least 4-5 times and nothing has been damaged. One day after hiking the flash wouldn’t pop up, but it turned out to be a tiny piece of grit which was easily blown away. Still very impressed with this camera and I’ve now had 3 close friends buy this camera as well. 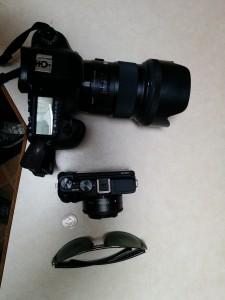 **07-15-15 update** I just got back from a backpacking trip in Teton National Park. You can view the photos taken with this camera here. **end update**

I’ve had the camera for a few days and I am extremely happy with my initial impressions. I am full time wedding photographer and shot nearly 200,000 photos on a few 5dmkiii’s in the past couple years. I haven’t owned a “consumer” level canon camera in quite awhile. I bought this camera because I was sick of having my life captured on a cell phone, and I can’t justify carrying around a monster camera and lens everywhere I go. A more fair comparison would be comparing the M3 against another  apc-c camera, but for my purposes I want to find out if the M3 is “good enough” so that I can leave my big camera at home.

Here is my review of the Canon EOS M3:

Size – As you can see, the size between the M3 and the 5D MKiii with Sigma 50mm 1.4 Art lens is significant.  Those of you used to using a big camera might initially be worried that it is too small. At least in my opinion, it is not. All the controls are well placed, and easily found with your thumb and index finger. Also, the default assignments function the same as Canon’s high end cameras. The shape of the camera and materials make it easy to hold on to. Having a giant DSLR as your only camera makes it difficult to get great everyday photos. I rarely carry it except for weddings, and when I do travel with the beast, it is a burden. For backpacking and even day hikes having a 5dmkiii with you is a significant detractor. So, in a lot of cases a small camera is a major plus, but what are the trade-offs? 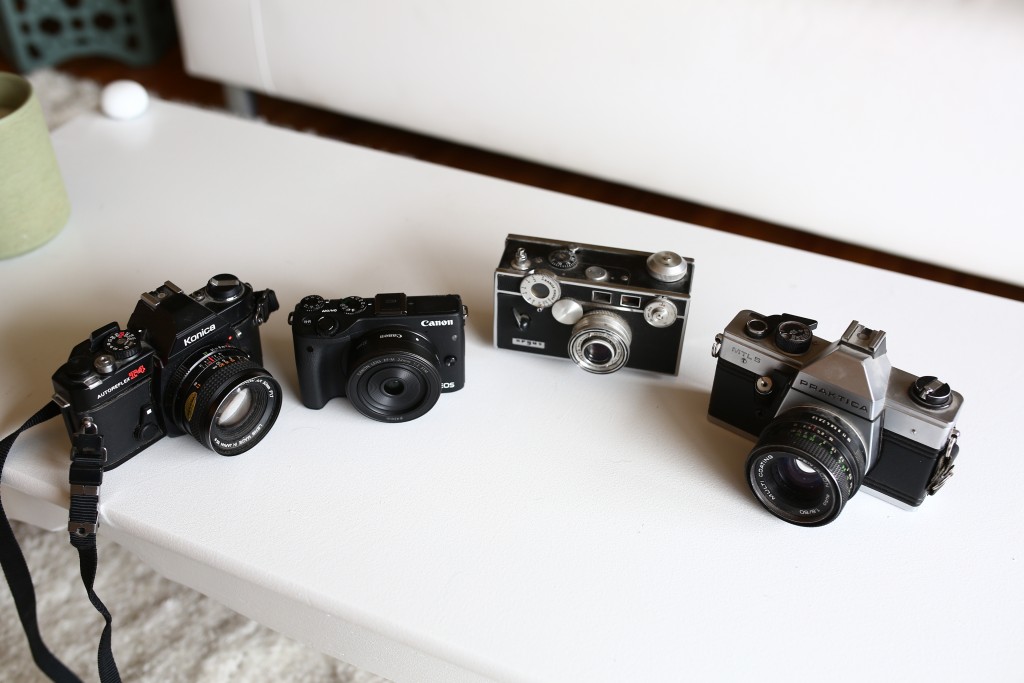 Image quality – I’m extremely impressed with the color quality, noise level and resolution of the jpegs coming out of the camera. I did a number of test shots comparing this EOS M3 + ef-m 22mm lens to my 5dmkiii + sigma 35mm 1.4 Art. Remember, the 5DMK iii setup is at least $3800 if you bought it today. Whereas the M3 + lenses is under $800. I paid more for my Sigma 1.4 lens than the entire M3 kit. The 5dMKiii is also a full frame sensor tuned for high iso performance… and did I mention it weighs 4-5x as much. All these shots where taken at the same ISO and aperture value. I varied the shutter speed by 1/3 stop on the MKiii to attempt to achieve the same exposure (but you’ll notice that I was not perfect). Both cameras were set to standard noise reduction, Medium sharpening, and highlight priority mode (D+) The dynamic range is definitely better on the MKiii at both ISO ranges I tested (400 ISO and 6400 ISO), but especially at the lower ISO I thought the M3 performed very well. At high ISO (6400 ISO), there was a significant difference in image quality. The MKiii takes almost “clean” images, where as the M3 lost a lot of detail from the noise reduction. Also, I had the MKiii 1/3 stop brighter, but it ended up being nearly a full stop brighter (9/10ths) when compared in lightroom. So, the 3 year old mkiii still holds it’s own in image quality, but the M3 provides “professional looking” images at a fraction the cost and size.


Auto-Focus – For still objects the autofocus was extremely accurate and quite quick. Not a noticeable difference in autofocus lock on speed between the M3 and 5dMKIII until I was in very low light but still very good. I tried touch focus, and single point both of which worked well. It also has a tracking mode where you can touch any subject on the screen and it will keep it in focus. All these methods worked well and resulted in near perfect focus for normal use. The camera also has one touch controls to switch to manual focus with focus peaking on the screen.  I also tested out servo focus on the ef-m 18-55 lens and my 70-200 2.8L IS II. The short and long of it is that auto focus worked great on the 70-200, but not servo mode.

The closer shots of Moses’s Head I was purposely moving my body back and forth slightly, as you can see, the only time I obtained good focus was when both the photographer and subject held still. A big problem was that it was really hard to keep the subject in frame because you can’t see anything on the screen. However, even when I kept Moses close and centered it wouldn’t track.


Build quality – I As several people have correctly pointed out, the body is in fact magnesium alloy covered with similar coating as to higher end canon cameras. The flip out screen and pop up flash seem really solid and I expect that they will last a long time with proper care. The hinges on both of these mechanisms are small . I would imagine that if you dropped the camera with the screen flipped out or the flash out that you could probably damage them. I will not be purposefully testing this. 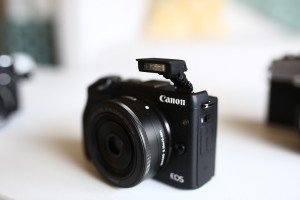 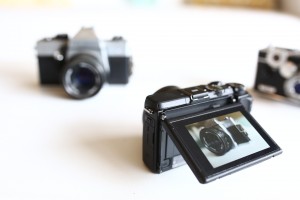 Features – My 5dmkiii has very few frills so I was impressed by these items. From my perspective the built in WIFI is really nice. It’s easy to send photos to your phone, google drive, your computer, flicker and a handful of other services. The flip out screen is awesome. Gone are the days when you have to lay in the dirt to get a photo a few inches off the ground. You can even flip the screen forward for a selfie mode. Say what you will, but I have numerous times given my camera to a stranger to take a photo while traveling and had them take something ridiculously awful. I’ve gotten pretty good at the dslr selfie, but this screen will definitely make it easier. The pop up flash allows you to tilt it up for bounce flash. Nothing looks worse than a tiny flash pointed straight in the face of your subject, but with bounce flash you can get a professional look from your tiny camera. In my tests it was more than bright enough to light a room with a standard height (8ft) white ceiling. I’m sure it’s not as powerful as the 600EX RTs… but if you need more power you can put that on this camera as well.  I bought the Electronic Viewfinder, but have not used it much. It’s a bit faster to frame a photo with the viewfinder, but I really find using the touchscreen for auto-focus to be convenient. I’m not sure which way I’ll use the camera, and I’m personally really happy that it is removable rather than built in.

Controls– I passed on the first versions of the EOS M because of the lack of external controls. With the M3 it is finally a camera for serious photographers. You can easily shoot anywhere from full auto to full manual with all the controls at your finger tips just like a real DSLR. It even has auto exposure adjustment dial which makes shooting TV or AV very easy. The M3 even has programmable buttons so you can set it up exactly how you want. Many of the settings are accessible both by hardware buttons as well as the touchscreen. The touchscreen is very responsive with good menu layout and makes accessing a number of settings very easy.

Conclusion – Mirrorless cameras are the future of photography. At some point the bulk of a camera like the 5dmkiii + high end lens makes you a worse photographer. If you’re serious about photography, but your current camera is so big that you don’t use it, then this is great option. Personally I think that this camera will be a great walk around camera. The image quality is more than sufficient for capturing life memories and travel shots. The single shot autofocus on both my ef-m lenses (22mm and 18-55mm) was fast and accurate. The servo focus on the 18-55mm was good enough that I will easily get action shots of pets and kids in action.  The standard EF lenses that I tested focused correctly, but were not quite as fast to lock as the EF-M lenses. The Canon L series lenses I own and the Sigma Art lenses take beautiful pictures, but so does the $100 EF-M 22mm.

I am a fairly avid landscape photographer. I know that for backpacking I will definitely be opting for this camera, but it remains to be seen whether or not I feel comfortable leaving the MkIII (or 5dMK IV), at home for trips where photography is the main goal.  For bird and nature photography this could be a great option for some people. If your animals  are prone to moving quickly you’ll probably be better off with a 7dmkii.   Canon did a great job with the Canon EOS M3, and it’s a shame it’s not available with a USA warranty. It’s also a shame that Canon hasn’t come out with a full frame competitor to the Sony A7. If I could have a camera with the features and lens options of the Canon EOS M3, the size of the Sony A7 (or smaller),the image quality of a top of the line full frame sensor and the price of a camera like the Canon 6D I would have bought that instead. However, since that’s not in existence I saved myself a few hundred dollars and will be very happy with this camera.

Hands on Review of the Canon EOS M3 VS 5D MKIII was last modified: March 14th, 2016 by DnK Photography